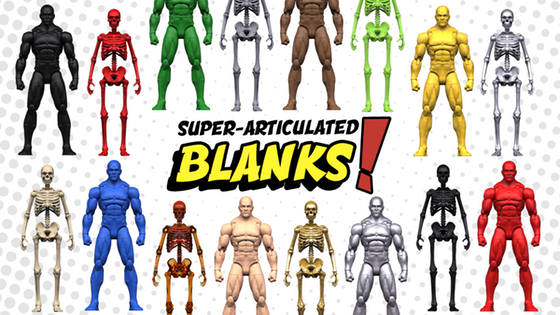 Latest Updates from Our Project:

Please take a moment to read this first:

The amount of vile messages, threats, email spam bots, malware, harassment, and just outright disgusting behavior from a good number of people got old long before the last Kickstarter ended.  There are a select few who are relentless in trying to do everything they can to prevent these figures from seeing the light of day.  Though the first Kickstarter’s figures have taken longer than they ever intended to, they WILL be released as soon as they are ready and corners are not being cut just for the sake of a more speedy delivery.  When there is no update, it’s fury and vitriol.  Whenever there is an update stating anything other than the figures being ready for shipment, it’s more fury and vitriol.  This only makes everything much more of a headache than it has to be. Updates should not and do not have to be excruciatingly painful to make. There has to be some sort of middle ground.   And to those with malicious intent: Please stop.  There is nothing that can be done to prevent these figures from being released to all the backers who helped fund this venture in the first place.  To all those who do not fall into that category: Thank you for the continued patience and understanding.  This wait will be worth it and everyone will be pleased with the items in the end.

Since the last update, the factory working on the Skeletons modified the tooling for the wrist pegs, but the issue of the ends stressing the sides of the forearms too much STILL exists.  Even after giving instruction and accompanying 3D files showing how the inner side of both bones (the radius and ulna) could be enlarged, that change did not turn out as it was intended. They essentially had the gap between the bones filled in on part of the inner forearm and it still did not solve the issue on top of giving the lower arms the undesired look.

The elbow joint is also unexpectedly a slightly different size now and is also putting too much stress on the inner side of the upper arms.

It has been a very long, frustrating, and flat out exhausting process constantly receiving changes very late and that are not what was expected.  Both of these things are being addressed now and everything is being passed along in writing, via pictures, and 3D files so as to be clear as day in showing what these changes should look like.

See the below shots. This sample is in a very light beige/milky colored PVC and the POM parts are slightly brighter, both of which are hard to photograph and pick up so much light.

The factory working on the Male blanks has reportedly completed all the previously requested changes and has parts for several sets of figures that have been injected already and are just waiting to be assembled as of last week.  Pushing them every single day to get those assembled and sent over to be inspected to double check that everything has been taken care of.

Had not intended for such a long gap since the previous update, and definitely hoped to be completely done with the tooling modifications now, but there are still some minor things that need further adjustments on each of the Male and Skeleton figures.

-The joints have been tightened and work properly now.

-The pins have been revised once already so the diameter of the inner portion (that fits snugly into the holes of the elbow and knee joints) is correct, however they did not fix the length of them, so they are still sticking out unevenly.

-There are two areas on either side of the torso that were brought up to the factory with the previous test shots, but they've overlooked those changes to the ABS tooling. Getting rid of the unwanted indentations still needs to be fixed.

-Finally, the front of the left upper thigh (just under the thigh cut) has an area where there is an unwanted indentation that will need to be fixed as well.

-Since the previous test shots, the limbs all fit as they should now and the joints have been tightened.

-The POM wrist discs could use further re-shaping even after their latest round of revisions, so that swapping the hands is even easier. Even though they were changed in the latest round that was completed, the hands are still too difficult to remove without applying heat, which is not ideal at all since it could lead to breakage. That factory is making the adjustments to the POM tooling without having to re-do it all so hoping to see those changed within the next 2 weeks as they've said.  The below pic is of the most recent POM part pulls, still attached to the 'tree', that will be further modified.


Still pushing the factories to get through the last of these tooling changes ASAP every day, and hoping that they actually get everything addressed in this current round of changes they're working on.  As this process goes, they can give estimates when the current round of changes will be done, but until that IS done, there is no way to know if they have successfully hit every item on the list. For that reason, it's always hard to give direct time frames on when everything will be done, but everything is closer than ever.  Updates from the factories with the latests on the changes will be posted as they come in.

It's Chinese New Year now so everyone at the factories is on break until later in the month but a Male blank with some bases was sent over here to be examined further. As was stated in the last update, the articulation needs to be tighter and the pins need some revisions, but it's coming together nicely.  This sample also has two right calves so please ignore that assembly error.  The final figures will have all the proper parts.  Here are some pictures of the Male blank alongside some other 6" figures.  No super dynamic poses since the joints aren't as tight as they need to be currently, but that will all be possible in the final product.

The heads are compatible without modification on some other 6" figures and vice versa. It's very much a case by case basis since other figures don't have a universal neck or neck ball joint size but some of those head swaps can be seen here:

The bases work with figures from other lines but will also be a case by case basis since foot peg hole sizes vary amongst figures:

When everyone at the factories return, they'll get back to work on the revisions needed for the Male and Skeleton figures, and new samples should arrive soon after.

Just to update everyone, adjustments to the tooling are still being made.  Still trying to get the factory with the Skeleton figure to get the size of the sockets on the skeleton correct so that parts are held together tightly enough while still allowing proper movement.

The factory doing the Male figures is making adjustments to some of the joints (the detents and some sockets in particular) and the arm/leg pin lengths in order to have sturdy articulation that holds poses well.  (Detents are what create the ‘ratchet’ effect in joints when they are moved, for those that don’t know). All the parts had labels added ("R" or "L", that you may be able to spot in some pictures) to help workers with proper assembly.  There are also some adjustments being made to the inside of the ABS torso pieces so the ab crunch holds poses without being floppy.

Always reluctant to show pictures of parts and mold tests because these are not final, and will be improved upon, but here they are.  The size of these parts post-tooling is correct so there is no need to worry about the final figures being shorter than what was promised and pictured as that has been a concern of a couple backers.

Again, appreciate the continued patience from those backers who have shown just that.  To others, this campaign has fallen behind the original targeted goal but the figures are continuing to be worked on with the factories so great product is able to be delivered. The factory workers are going to be taking a break for Chinese New Year from early February until later in the month, but will be back at this work as soon as they return. Unfortunately, delays with small runs of figures like these is very common among factories that produce items for a large number of other clients, many of which have much much larger orders.